We couldn't do this, without them. 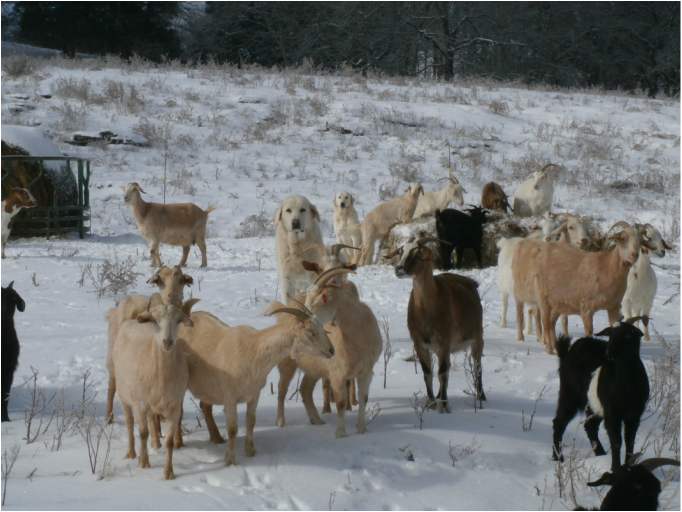 We have Akbash LGDs to keep the herds from harm.  Not only will they stay with and protect their goats, they move their goats away from fences and from time to time they herd the goats to keep them together.  If you are not familiar with the Akbash breed, I can tell you from experience they are extremely intelligent and fierce protectors.  I love my dogs as much as I love the goats. They work hard while asking very little in return - a scratch on the head, a good meal, and plenty of room to stretch their legs. 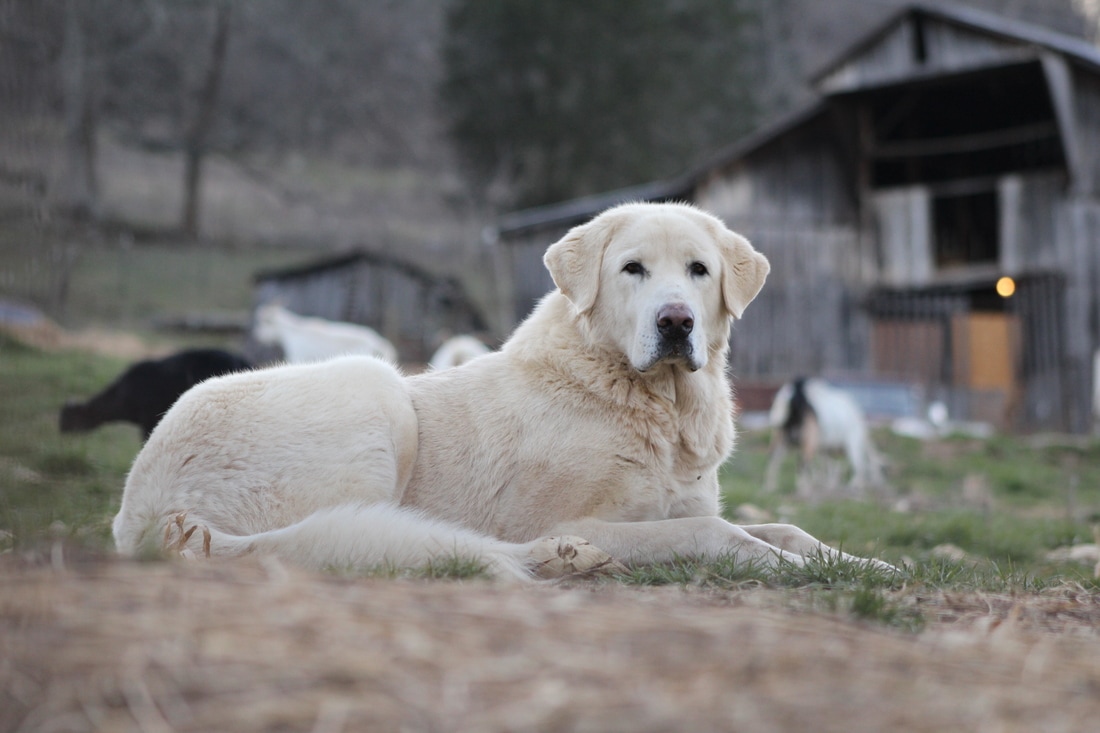 Buddy - March 2017
Buddy has been with us longer than any of our other Akbash dogs. We went all the way to Missouri to pick him up when he was eight months old. He was out working in the pasture with his Dad and a few of his brothers and sisters. They called him Sasquatch and for good reason!! Buddy's always on the job. Born in 2011, he is also the oldest in our security force. He is in charge of training the new recruits. Ole Bud was neutered young, so there are none of his offspring here on the farm and I regret that very much. But like a good drill sergeant, he whips all of them into shape and gets them ready for action.

Some of you know my former Akbash, Millie, passed away during a C-section in late March 2016. She left us with several puppies. I tried my very best to save them all, but this girl was the only one to survive a human mom from day one. Named for her mom, Millie is her mom made over. Also a daughter of Sam, Millie is a large Akbash female. She has a special love for patrolling the perimeter and even though raised on a bottle by us, she has never tried to leave the goat pen. 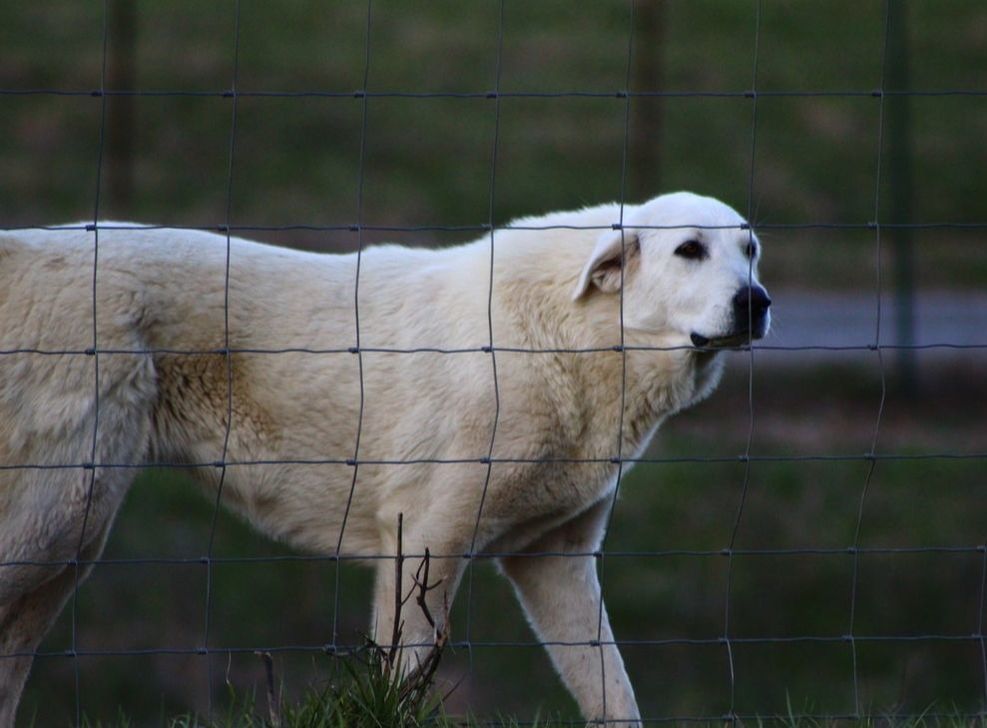 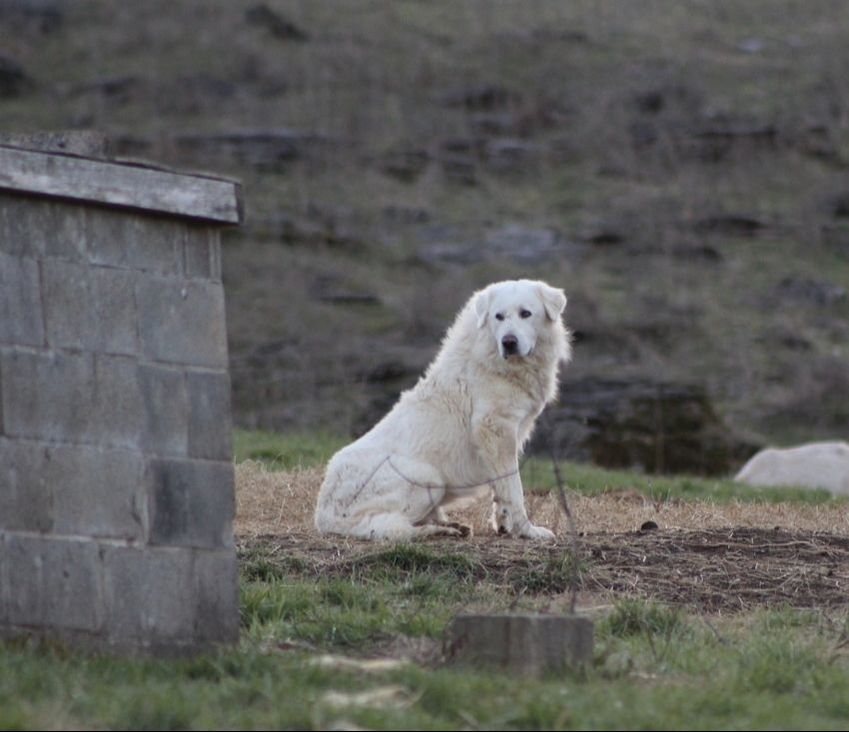 Sam came from Missouri to watch over goats here in Middle Tennessee. He is the only dog ever on the place that doesn't like to be handled - at all! He will wag his tail at us, and that is all the affection he gives. But he brings his girls to us when we call them and keeps them away from the fences, so if he doesn't like a pat on the head, we respect that and just let him do his job. His natural protection instincts are super!
He is also the only "long-haired" Akbash we have. He loves his goats! He had rather lie in a mud puddle in a rain storm and be near the goats than get into a dry barn without them!
Our dogs work. Every day, every night. While every shift doesn't always bring about threats or danger to the herd, sometimes there are. These dogs have ALL been tested and have performed above and beyond. The photo at the right shows Hoss after a run in at the buck lot near the barn. At first sight, it looked as though he had been seriously hurt.

Copper is the queen of gathering.  Tough as nails with large contrary cattle and gentle as can be with newborn baby goats.  When the stock needs to come to the barn, Copper gets the job done.  By far the smartest animal we've ever known. Copper will turn 10 years old in June this year. She is still going strong and we are getting her regular check ups with the vet to make sure she is in the best health possible and here to help us for as long as possible!